I Begged for Leftovers not Food – Psalm Adjeteyfio.

Embattled veteran actor Psalm Adjeteyfio has insisted that he never begged for food from MzGee; rather, he asked for ‘leftovers’ – a construction he terms “figurative”.

His clarification comes on the back of a backlash from a section of the public who cannot fathom why the veteran actor would continuously beg for assistance even after receiving cash donations from some personalities including the vice president, Dr. Mahamudu Bawumia who gifted him GH¢50,000.

TT, as the actor is affectionately called, in an interview on Okay FM, Wednesday, revealed that even before Dr. Bawumia’s donation, he received GH¢40,000 from the Office of the Chief of Staff.

Puzzled over his decision to plead for help despite receiving several assistances, Halifax Ansah-Addo, the host of the show asked “why are you still asking for food from MzGee?”

“If you listened to the audio, there was no mention of food. I just said ‘leftovers’. I never mentioned ‘food’. ‘Leftovers’ for what? What leftovers? In the kitchen! Now, I was using figurative language. If you’re my friend and I’m in need and I ask if you don’t have some ampesi, it doesn’t mean I want ampesi”, TT said while detailing the relationship that exists between him and MzGee.

In the last couple of days, has been in the news after an audio clip of him begging MzGee for leftovers landed in the public domain. In the said audio, the actor indicated that he has invested the GH¢50,000 the vice president gave him and that since the vice president’s donation was made public, all those who used to help him withdrew which has created a lot of problems for him.

“MzGee good afternoon, I’m wondering if you would have some leftovers in your kitchen to spare. [The] reason is, people who use to help have all withdrawn their help when they heard that the Vice President had given me the money. But you would agree with me that [with] such monies, you need to invest wisely and that is what I have done and when you make investments too, it will take time before you begin enjoying it,” the Taxi Driver TV series actor explained in the audio.

“Right now, the situation has created a lot of problems for me; you know, a lot of people use to help me a lot but now everybody…I even understood that some people contributed some money in States to be sent to me; the moment they heard [that the Vice President had given me the money] everybody went for his money,” Psalm Adjeteyfio added. – source: ghanaweb

Thanks for reading “I Begged for Leftovers not Food – Psalm Adjeteyfio” on Desvid.com 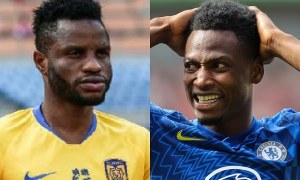